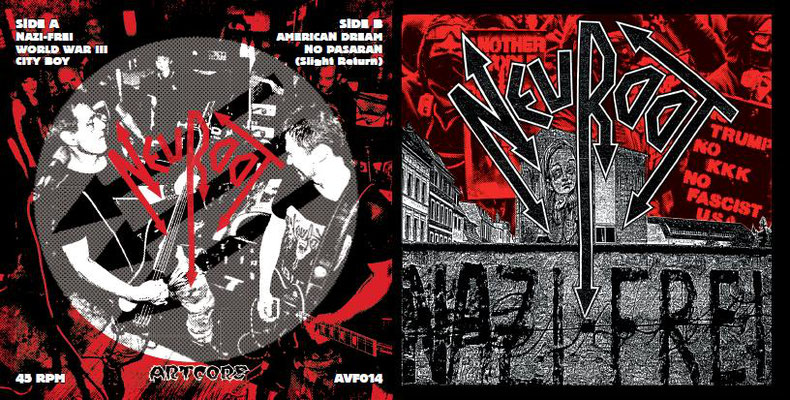 Hailing from Holland, founded in 1981 by bassplayer Marcel and arguably one of the best bands from the golden age of European HC Punk, an age roughly between 1984-1990.

Known for their brutal Dbeat style with awesome (distorded bass) playing yet relative accomplished overall musicianship and songwriting, a not so common trait in the genre.

Toured the continent and the UK in the eighties extensively and did a couple of Vinyl releases back than from which the 2012 (US) Havoc records  ‘Right is Might’  rerelease got the most raving worldwide reviews and acclaim.

Set to be released on the famous US  Pusmort records back in 1986 Pushead, labelowner and friend of Metallicas, and soon to be  recordsleeve designer, told them “the Guys from Metallica were over at my house and  they really liked your record”

…as did everybody else worldwide.

To this day the record has been branded “insterstellar”, amongst others, and “impossible to do again”

Originally a four piece band the band resurfaced for an Amsterdam Paradiso gig and Dutch Punk Sampler in 2013 as a three piece with original founding members and ‘artistic’ core Marcel and Ed on bass, guitar and vocals, completed with Ares on drums.

Sparked by the sheer new energy the band is gigging regularly, caracterised as an energetic version of the eighties mark and is set to release a new record beginning of 2018.

According to US fanzine Maximum RocknRoll (MRR) which reviewed the 2009 rerelease of the ‘Macht Kaputt” LP with this conclusion:

“ ..if you are buying only one reissue this year, than this is the one to get”

and concluded their MRR review of the 2012  ‘Right is Might’ rerelease on Havoc records (US) with this:

“I seriously can’t listen tot his sitting down…- I have to get up and move around!

This is mandatory for fans of hardcore punk!”

Neuroot live, ¡No Pasaran! at the Revolver club Taipei(TW) april 2019

"...I seriously can't listen to this sitting down.. - I have to get up and move around! This is mandatory for fans of hardcore Punk!".

De waarde van NEUROOT wordt kort samengevat door (weer) de MRR, die in 2009 schreef over de heruitgave van hun legendarische  ‘Macht Kaputt..” LP:  “If you are buying only one re-issue this year, than this is the one to get!”